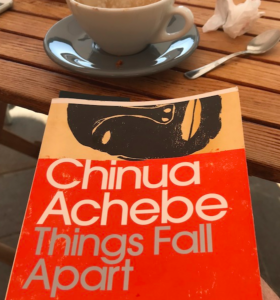 Chinua Achebe’s Things Fall Apart summary by Department of  English & Literature  University of Ibadan Distance Learning center. This article is published for the purpose of knowledge on African Prose for all students ……Chinua Achebe described art as a celebration encompasses the “remembering of blessing or happy events” in his 1990 essay “African Literature as restoration of celebration. Importantly, from his Igbo perspective, this celebration “deliberately sets out to include other experiences- indeed, all significant encounters which man makes in his journey through life, especially new, unaccustomed and thus potentially threatening,  encounters”  (pp  2-3).  For  Achebe  celebration  takes place within a  political  context.   He  is   committed  to  comprehending   the outcome and legacy “especially for Africa, for black people, for all deprived people” of the bizarre disaster that resulted from “Africa’s meeting with Europe” in the period of high imperialism in the late Nineteenth Century.

Achebe’s   life   and   art   encompass   the   essential   duality   of  human experience as embodied in the saying drawn from Igbo world view that “Wherever something stands, something, stands beside it “the art portrays a   continuing  effort   to   reconcile   the   disparate   elements, essentially political, that alter and shape perception, and therefore, reality. Along these lines, Achebe has said: ⇒ Chinua Achebe’s Things Fall Apart,,

I had to tell Europe that the arrogance on which she sought to excuse her pillage of Africa, i.e that Africa had a history, a religion, a civilization. We reconstructed this history and civilization and displayed it to challenge the stereotype and the cliche. Actually it was not to Europe alone that I spoke. I spoke also to that part of ourselves that had come to accept Europe’s opinion of us (2003:15).

Achebe had the task of reconciling the dualities inherent in the personal experiences. These experiences were shaped by the birth during the colonial period and his exposure and attraction to both African and European culture through education, political institutions, and most especially for the writer, language. A story of Achebe’s classic, Things Fall Apart (1958), describes-the coming of the white man and the initial disintegration of traditional African society as a consequence of that- is typical of the break down all African society have experienced at one time or another as a result of their exposure to the West and, moreover, individual Africans all over the continent may identity with the scenarist Achebe has depicted. The novel sums up his religions experience, both traditional Igbo and Christian; his experience of language, both Igbo and English; his education both formal and acquired; and his gander as a writer, both authentic and educative.

Achebe decided to be a writer when he encountered Joyce Cary’s novel Mister Johnson (1939), as a student at University College Ibadan:⇑ Chinua Achebe’s Things Fall Apart

One of the things that probably finally decided me was a novel set in Nigeria by Joyce Cary. I regard him as one of the outstanding British writers of the first part of this century. Now he was in this country as an Administrative Officer during the First World War and he wrote this novel called Mister Johnson, which is quite famous, and I feel that its not in spite of this man’s ability, in spite of his sympathy and understanding, he could not get under the skin of the African. They just did not communicate. And felt it a good writer could make this mess perhaps we ought to try our hand. (1962:12).

For Achebe, Minister Johnson represented the worst kind of portrayal of Africans by Europeans. The portrayal was more disheartening because Cary was working hard to achieve an accurate depiction, unlike his Co- British travelers during the imperial-colonial period who deliberately, often cynically, exploited stereotypes of African and African society. Achebe felt that the record had to be set straight because Cary was a liberal-minded and Sympathetic writer, as well as a colonial administrator.

In Achebe’s 1988 published in Hopes and Impediments, he writers;

I was born in Ogidi in Eastern Nigeria of devout Christian parents. The line between Christian and Non-Christian was much more definite in my village 40 years ago that it is today. When I was growing up I remember we tended to book down on the others. We were called in our language “the people of the church” or “the association of God” The others were called… the heather or even “the people of nothing”…” We lived at the crossroads of cultures. We still do today… On one arm of the cross we sang hymns and read the Bible night and day. On the other my father’s brother and his family, blinded by heathenism, offered food to Idols… what I do remember was a fascination for the ritual and the life on the other arm of the crossroads. And I believe two things were in my favour – the curiosity and the little distance imposed between one and  it by the accident of any birth. The distance becomes not a separation but a bringing together like the necessary backward step which a judicious viewer may take to see a canvas steadily and fully.(1988:23)

Given Achebe’s aims as an artist –his duty to the art and the social purposes he intends it to serve his sensibility is essentially Igbo, despite any correspondences. One might identify between his sensibility and that of artists in other places and cultures.