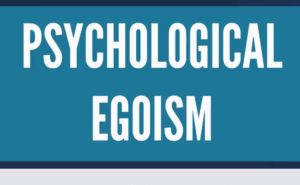 What is Psychological egoism?

Psychological egoism maintains that human beings are constituted by nature such that they are always motivated to act on the basis of only self interest. In all human actions, people aim to benefit themselves, to gain something they consider good for themselves. The position of the psychological egoist is that people naturally care first for themselves and care about other people only if and to the extent that this would eventually is in their own interest. One of the advocates of psychological egoism is Thomas Hobbes. He affirms that all voluntary human actions tend to the benefit or good of the agent.

Altruism is the opposite of egoism. People behave altruistically when they act contrary to their self interest in order to benefit or protect the interests of others. An example of an altruistic act is the coastal guard who risks his life in order to save the life of a drowning child. There is a natural tension between psychological egoism and altruism since both cannot be true together. If people behave altruistically then psychological egoism cannot be true and vice-versa. If people are by nature purely motivated to act on the basis of self interest, then it becomes impossible to sacrifice their self interest in order to benefit or protect the interest of other people. That is, people by their nature cannot do what they believe is not in their self interest and also cannot refrain from what is seen to be in their own interest.

Psychological egoists contend that those cases of apparent self sacrifice are ultimately motivated by self interest. They argue that people act in order to satisfy their desires and derive some measure of pleasure, and what appear to be altruistic actions are really embarked upon in order to satisfy the desire of the agent. For instance, a coastal life guard that gets into the stormy waters in order to save a drowning child does so primarily because of the desire to save the child and the expectation that he will derive some measure of pleasure from the act. For psychological egoists, saving the child is not an end in itself, but rather a means to the self interested aim of getting pleasure or happiness.

At this point, there are two problems with the position of the psychological egoist. First, it is doubtful that everyone’s ultimate reason for acting is always the purely self interested reason of deriving pleasure or happiness. If this were to be true, people would always do what would make them most happy, but the reality is that this is not always the case. For instance, a young man, Richard, might actually prefer to watch the final match of the world cup football competition than visit his sick granddad. Watching the match would give him more pleasure than sitting in a smelly room with a sick person for 90 minutes. He believes that the experience would be boring and depressing to him. However, Richard also knows that the grand-dad would be very disappointed if he did not go for the visit, and for this reason decides to sacrifice the football match for the visit to his grandparent. Definitely, contrary to the position of the psychological egoists, this would not bring more happiness to Richard.