Home
Culture
Google celebrates Zimbabwe’s Culture week with a doodle of the Mbira.
Spread the love

The game tells the story of a Zimbabwean girl who watches the mbira being played as a child, before growing up and becoming a famous musician herself. 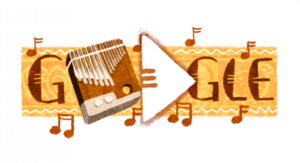 It encourages users to virtually play both traditional and modern songs on the instrument, which has been played in its current iteration for over 1,000 years.

The mbira plays a part in many traditions and ceremonies of the Shona people, and songs are passed down through generations.

It is played at weddings and at social gatherings – and while it used to be traditionally played by only men, now many women are taking up the instrument.

The mbira lends itself to improvisation and personalisation, which means that no two performances are alike.

It consists of a wooden board with attached metal tines. To play it, you pluck the tines with your fingers.

A wooden version of the mbira – with bamboo tines instead of metal – was first created in West Africa 3,000 years ago.

The version that exists today, with metal tines, has been around for 1,300 years.

Why is Google celebrating the Mbira?

Before creating the Google Doodle, the team visited the Shona people in Zimbabwe to learn about the Mbira instrument.

Producer Colin Duffy said: “Without a doubt the most enjoyable thing about working on this Doodle was being able to experience and learn about Mbira from the Shona people in Zimbabwe.

“Prior to this project I could not tell you much about Mbira but the kindness, depth of history and open mindedness that the people of Zimbabwe showed our group was life-changing.”