With its determination to deliver a top defence of the nation, Nigerian army are quite in possession of amazing armored vehicles that can help ease the task.

Some of the most advanced armored vehicles in Nigeria Army include, ZSU-23-4 is a self-propelled anti-aircraft gun, ISOTREX`s Phantom 2, Marauder and locally manufactured like Infantry Patrol Vehicle (IPV) fitted with a mounted heavy machinegun; a Tactical Patrol Vehicle with seating for eight personnel, and a Light Tactical Vehicle armoured personnel carrier.

The Ezugwu armored is locally made and one of most advanced armored vehicles in Nigeria Army, one of many different vehicle types the Nigerian military is taking into service.

Other domestically produced armored vehicles in Nigeria Army include Conqueror and Champion armoured personnel carriers that were designed and built by the Army’s engineering unit. Nigeria’s Proforce has also delivering its domestically manufactured Ara APCs to the Army.

List of Most Advanced Armored Vehicles in Nigeria Army.

The ZSU-23-4 is a self-propelled anti-aircraft gun of Soviet origin. It was developed in the early 1960’s to replace the older ZSU-57-2, which was very powerful but lacked radar control and rate of fire. 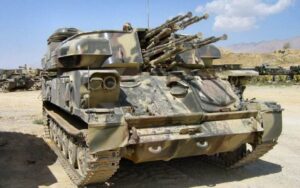 The name ZSU stands for “Zenitnaya Samokhodnaya Ustanovka”, which is Russian for “anti-aircraft self-propelled mount”. The number 23 indicates the caliber and 4 the number of guns.

The RPK-2 Tobol radar is located on top of the turret. It has the NATO reporting name Gun Dish. The radar has a search range of 20 km and tracking range of 18 km. A target can be locked in 20 to 30 seconds. An optical sight is fitted for use against ground targets or under ECM conditions

The T-72 is a second-generation main battle tank that entered production in 1971. It was designed by Uralvagonzavod from 1967 to 1973. The T-72 entered service in the Soviet Army in 1973 and was widely produced and exported, with more than 25,000 units seeing service in 40 countries. 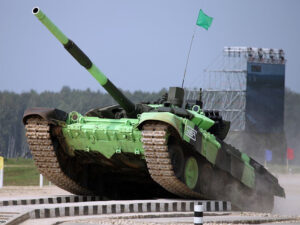 The layout of the T-72B3M is identical to that of the standard T-72 with driver’s cab at forward hull, fighting compartment in the centre and the power-pack at the rear.

The tank is manned by a crew of three, including a driver, a commander and a gunner. The middle section of the forward hull houses the driver, while the turret accommodates the other two crew members.

The tank features an advanced fire control system and a new thermal sight. The mobility and combat characteristics of the tank have also been improved to compete with the most advanced tanks worldwide.

The T-72B3M tank is also equipped with radio systems for encrypted digital voice and data transfer, snorkels for deep fording, and a built-in blade for self-entrenching.

ISOTREX`s Phantom 2 is a new version of the 4×4 B6 Armoured Personnel Carriers (APC). 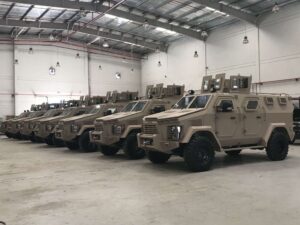 Other than a 5 door configuration, with 360° gun turret and with two or three escape hatches, the Isotrex Manufacturing allows you to customize the vehicles for the special clients needs and requirements.

The Marauder is an armored, mine-protected vehicle that is produced by Paramount Group in South Africa. It was launched during the 2007 International Defence Exhibition and Conference in Abu Dhabi, the largest arms exhibition in the Middle East (Wikipedia). 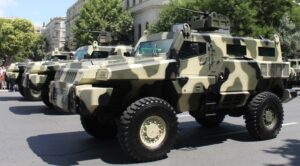 Following reports earlier in March 2019 that the Nigerian Air Force’s land regiment had procured Marauder MRAPs, Paramount Group  confirmed the sale, with Senior Vice President Eric Ichikowitz saying, “We are privileged to work alongside the Nigerian Air Force, commending, through the acquisition and deployment of the Marauder, their continued commitment to enhancing their national defence and internal security capabilities and prowess.” 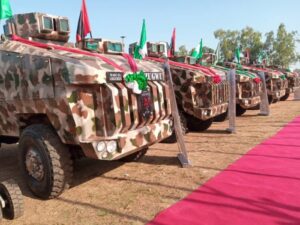 The original version carries a crew of 12: commander, driver, two gunners and eight soldiers. Unusually, the vehicle has two weapons turrets which can traverse 360 degrees and a telescopic long range camera for improved situational awareness.

The 4×4 Ezugwu is fitted with an independent suspension system and is powered by a Chinese WD615 turbodiesel engine.

It is believed the Ezugwu was designed on a Tatra 4×4 chassis, according to African Military Blog. The Nigerian Army apparently has  acquired many of Ezugwu vehicles.

The ARA or THUNDER is a combat vehicle in the category of MRAP (Mine Resistant Ambush Protected) vehicle fully designed and developed by the Company Proforce. 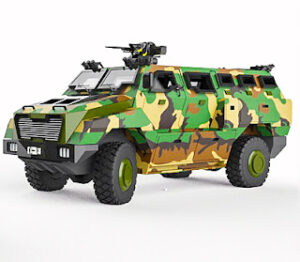 The vehicle can carry a total of 10 military personnel including driver and commander. It can run at a maximum speed of 96 km/h.

Combining an array of latest technology the ARA is a mission adaptive vehicle that provides superior crew protection and offensive ability.

The ARA’s traction and small turning circle gives it superior maneuverability through narrow roads. This capability combined with a powerful 400HP Cumins engine with Allison transmission provides the ARA MRAP the ability to deal with extremely rough terrain effortlessly.

The ARA’s Protection capability comes with full spectrum hybrid armour systems. As standard, the vehicle armour protection systems is independently tested for STANAG levels and above, and is designed to be fully up-gradable. The ARA can be equipped with slat armours and iron curtains to protect against RPGs.

The ARA can be fitted with unique hybrid passive and reactive armours for effective defence against IEDs, EFPs and shape charge warheads. 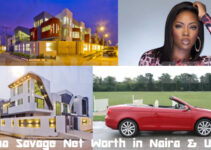 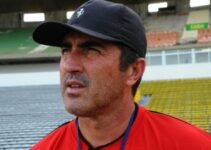 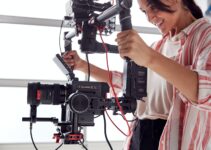