Tribes & Local Government in Ogun State Nigeria  – Ogun state is a state in southwest Nigeria that was created in 1976. It is bounded by Oyo, Osun, Ondo, and Lagos states. 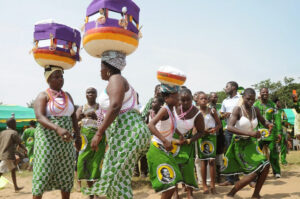 Ogun state is made up of 20 local government areas and six (6) tribes. It is also a host state of 9 universities, most of which are privately owned.

Ogun or Ogoun (Yoruba: Ògún, Portuguese: Ogum, Gu; also spelled Oggun or Ogou; known as Ogún or Ogum in Latin America) is a spirit that appears in several African religions.

He was the first Ooni of Ife after the demise of Oduduwa. A warrior and a powerful spirit of metal work, as well as of rum and rum-making.

Most of these groups speak distinct languages or rather distinct dialects of the same language. These ethnicities of Ogun State also have varying history and accounts of origin, varying cultural norms and traditions, and of course live in different regions of Ogun State.

We have take a look at the different Tribes & Local Government in Ogun State, where they are found in Ogun State, brief  accounts of origin and language they speak.

The Yoruba people (Yoruba: Ìran Yorùbá) are an ethnic group that inhabits western Africa, mainly the countries of Nigeria, Benin, and Togo. The Yoruba constitute around 47 million people worldwide. … To the east are the Edo, Ẹsan and the Afemai groups in mid-western Nigeria.

The Yoruba homeland is located in west Africa. It stretches from a savanna (grassland) region in the north to a region of tropical rain forests in the south. Most Yoruba live in Nigeria.

However there are also some scattered groups in Benin and Togo, small countries to the west of Nigeria. The occupations and living conditions of the Yoruba in the north and south differ sharply.

The Yorubas in Ogun are believed to be descendants of Ogun, a great warrior and the Yoruba god of iron. This people are like other Yorubas in lifestyle, culture and religion.

The Yorubas are perhaps the most educated group of people in Nigeria. The reason for this is the free education policy that has been own for in the Southwest for ver a century.

The Yorubas have farming and trading as their major occupations. Also, Christianity, Islam and traditional religion are the three religions practoised by this people.

Yoruba music includes songs of ridicule and praise, as well as lullabies, religious songs, war songs, and work songs. These usually follow a “call and response” pattern between a leader and chorus.

Perhaps the most interesting musical instrument is the “talking drum.” The “talking drum” features an hourglass shape with laces that can be squeezed to tighten the goatskin head, altering the drum’s pitch.

There are six tribes in Ogun state, each of this tribe speak a similar language called Yoruba. Some may have different pronunciations but they are all speaking in Yoruba language. See below:

The Ijebu claim to be the largest ethnic group in not only Ogun State or the South-west geopolitical zone but the entire country.

They are spread across various divisions in the eastern part of Ogun State.

Migration legend link the Ijebu origin to the biblical Jebusites and Noah.

Other migration legends trace the Ijebu people to Mecca where Oduduwa, the legendary ancestor of the Yoruba was said to be the son of King Lamurudu.

According to the legend, Oduduwa was expelled from Mecca when he resorted to idolatry.

However, the migration theory that the Ijebu came to their present location from a region of Sudan called Owodaiye is preferred by historians.

Ijebu Ode is the capital of Ijebu land, and the Awujale of Ijebuland is the paramount ruler of the Ijebu people.

The Egba are found majorly in the central part of Ogun State in local government areas such as Abeokuta North, Abeokuta South, Ewekoro, Ifo, and Obafemi Owode.

The Egba were originally under the Oyo empire, but became independent following the collapse of Oyo in the first half of the 19th century.

The Egba nation is made up of many subdivisions. These subdivisions include the Ake, the Owu, Oke Ona, and Gbagura, each having its own king.

The Alake of Egbaland is the most influential traditional ruler of the Egba, however, as mentioned earlier, each of the subdivisions of the Egbas has its own king.

The Awori people are found in parts of Ogun and Lagos.

They found their way to Lagos from Ile-Ife. Some towns that are occupied by the Awori tribe include Ota, Igbesa, Ilobi and Tigbo. They are majorly farmers.

Men from this tribe put on agbada while women dress just like people from the Yoruba tribe. Also, they are framers and traders.

The Ilaje of Ogun State are found in Ogun Waterside local government area.

The Ilaje are said to have left Ile-Ife in the 10th century following a disagreement with the Yorubas led by Oduduwa, the first king of Ile-Ife.

The Ilaje occupy the longest coastline in Nigeria. Their knowledge of the sea and ability to adapt quickly to changing climatic condition enabled them to conquer their harsh environment and turn it into a big advantage.

The Ilaje speak the Ilaje language, which is considered albeit controversially in some corners to be a dialect of the Yoruba language.

The Ikale trace their origin to ancient Benin Kingdom.

The Abodi of Ikale land is the paramount ruler of all Ikale people.

The Ikale speak the Ikale language, which is regarded by many as a dialect of the Yoruba language.

According to history, early Yewa settlers were great warriors, hunters and princes who were said to have migrated from Ketu, Ile-Ife, and Oyo in the 15th, 16th and 17th centuries.

Another migration also took place in the 18th and 19th centuries as a result of Dahomey and Egba invasions of some northern Yewa towns.

These migrations of different groups largely resulted in settlements of independent kingdoms and chiefdoms of diverse groups that constitute the various Yewa towns and villages.

Yewa people in recent history are predominantly farmers and traders.

There is no single Yewa language. Yewa land is a multi-language community.

These languages include the Sabe, the Ije, the Ifonyin, Eyo, Egbado, Ketu, Anago, and Egun. The Olu of Ilaro is the paramount ruler of the Yewa people.

Read: Most Beautiful State In Nigeria That Are Fast Developing (Latest).

Ogun State consists of twenty local government areas. They are:

Ogun State is divided into 3 (three) senatorial district, They includes: